Flood and drought cost of cars and sprawl 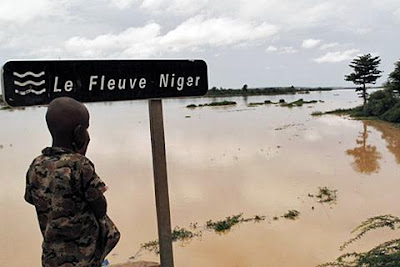 Floods Heighten Food Crisis in Niger | Africa | English: "Floods in Niger are compounding an already urgent food crisis in the region, as the Niger River reaches its highest level in more than 80 years.

Adamou says that homes, latrines and rice fields have been destroyed in the recent flooding.

He added that the people living the area rely heavily on the rice fields that have been destroyed, and there will be consequences for the surrounding populations."
at 12:54 AM No comments:

Rice is among the world's most important crops and a staple for people in Asia and Africa, with Asia producing and consuming more than 90 percent of the world's output.

A drop in production could lead to higher prices, fears over food security and more hunger in a world with a rising human population."
at 1:00 AM No comments:

The automobile is very likely the most influential and most harmful invention in the history of the world. If guns had never been invented, the world’s worst genocides could still have taken place under cudgels and swords. It is true that the atomic bomb has made possible the earth’s complete annihilation, but for the most part this remains only an unrealised possibility. The automobile, on the other hand, has already left hecatombs beneath its wheels and has helped unleash an ecological holocaust that is slower but not necessarily less destructive than any nuclear cataclysm. Nonetheless, the greatest danger of the automobile goes far beyond its tendency to crash and to pollute. Progressive movements for safety regulations and clean fuel, while admirable, do not address the most fundamental problem of the automobile: the deeper danger of cars is that even if they are some day made safe and clean, they will still have restructured nearly every aspect of human society according to their antisocial laws of motion. CarbustersMagazine

Climate change could destroy 80 per cent of rainforest by next century - Telegraph: "Rainforests currently hold more than half of all the plant and animal species on Earth.
However, scientists say the combined effects of climate change and deforestation may force them to adapt, move, or die.
By 2100, this could have altered two-thirds of the rainforests in Central and South America, about 70 per cent in Africa."
at 12:49 PM No comments: