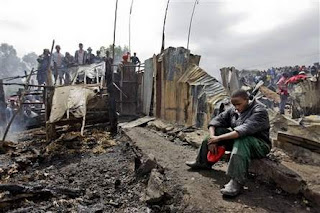 Joseph Mwangi, 34, sits in a state of shock after discovering the charred remains of two of his children, one aged 6 the other of unknown age, at the scene of a fuel explosion in Nairobi, Kenya, Monday, Sept. 12, 2011. A leaking gasoline pipeline in Kenya's capital exploded on Monday, turning part of a slum into an inferno in which scores of people were killed and more than 100 hurt. (AP Photo | Ben Curtis)
At Least 75 Kenyans Dead After Pipeline Explosion | TheLedger.com: "Mwangi had been feeding his cow when the call went out around 9 a.m. — a section of pipe had burst near the river that cuts through the slum and gasoline was pouring out. Men, women and children grabbed pails, jerry cans, anything they could find to collect the flowing fuel.

Mwangi had planned to get a bucket and join them — he'd done so before with earlier diesel leaks without any problem, he said, and a bucket of fuel could pay a month's rent. "Everybody knows that fuel is gold," the 34-year-old said."