All the latest news from the anti e-tolling marches - Times LIVE: "Dakile said the people would not accept the roll-out of e-tolling on roads between Johannesburg and Pretoria.

"The rich are getting richer and the poor are getting poorer. The public transport in this country is a mess.""

"...This e-tolling thing is another way to steal from the poor." Vavi said suggestions that people instead use taxis were "nonsense", as taxis were "moving coffins".

"We are saying use these yourself. Premier, can you get in the taxi? We want the public transit system now.

"Don't be arrogant with power, because we as workers will take that power and then you will be ordinary people," Vavi said.
at 11:49 PM No comments:

Nigeria Exxon spill spreads for miles along coast | Reuters: "(Reuters) - An oil spill at an ExxonMobil facility offshore from the Niger Delta has spread at least 20 miles from its source, coating waters used by fishermen in a film of sludge."

Pipelines will require more totalitarianism as oil runs out

This latest outage will add to a growing list of production problems for Africa's biggest oil exporter." 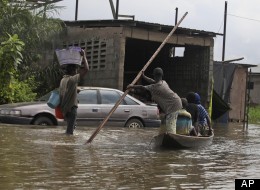