Developed world, after stealing for years, now wants all forgiven.

Imagine that you live in a small town on a river downstream from an affluent, yet polluting, city. For decades, the city grows richer and richer while it continues to spew out pollutants into your drinking water.

You're not happy about this and demand the city stop polluting and pay you compensation. After years of dragging their feet, city officials finally acknowledge a problem but say everyone along the river should be responsible for cleaning it up, whether they contributed to the pollution or not.

Not very fair, is it?

WikiLeaks reveals how Shell infiltrated Nigeria: "The petrol giant Shell has thoroughly infiltrated the Nigerian government, newly leaked WikiLeaks documents show. The multinational corporation inserted its employees into every key government ministry to gain unparalleled influence in policy-making in the oil rich Niger Delta. Al Jazeera's Jesse Mesner-Hage reports on how the revelation fits into the decades-long troubled relationship between Royal Dutch Shell and Nigeria."
at 8:33 AM No comments:

The contract, signed in Tanger on December 10, foreshadows the opening of Morocco’s first high speed line between Tanger and Kénitra in December 2015. This 200 route-km section is the first phase of the planned Tanger – Casablanca high speed line. From 2015, the double-deck dual-system Duplex trainsets will operate at 25 kV AC on the high speed line at a maximum speed of 320 km/h and between 160 km/h and 220 km/h on ONCF’s existing 3 kV DC main line between Kénitra and Casablanca."
at 2:00 AM No comments: 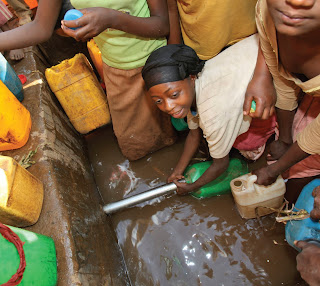 Climate change poses the greatest risk to the most vulnerable members of society. For this reason, children pay a high price for climate change, often bearing the brunt of increases in hunger, disease, population displacements and resource conflicts. And recent research by Plan International in Bangladesh and Ethiopia shows that girls are worse affected than boys. Plan-International
at 12:36 AM No comments: