Farmers in Africa devastated by #climatechange

coastweek.com: "“As you can see, every single tomato and vegetable in this farm has been submerged in water not forgetting that I spent a fortune to invest in this project in the hope that returns will be great,” Mwangi told Xinhua in his farm located in Kandara, a farming district 70 km northeast of Nairobi"
at 12:14 PM No comments:

Nigeria: Money is there for #publictransit, just not vision

allAfrica.com: "It is not because we cannot develop the metro due to paucity of fund as always insinuated by the government, but because we continuously misplace our priority, by placing in the fore what should be last, even if needed. Or, is it not in the same city that we have the National Stadium constructed at a very exorbitant inflated cost? Is it not the same city that hosted the All African Games with a very expansive games village, the CHOGM and not long ago the African First Ladies Summit with a very controversial and expensive African First ladies Peace Mission secretariat now being proposed? We can go on and on. On the other hand Malam el-Rufa'i could have had his short comings, but, the metro, or the on going light rail concept in Abuja development that was earlier abandoned, was not resuscitated until during his tenure. At least, that effort must be commended."

IPS – Should South African Taxpayers Subsidise Car-Making Robots? | Inter Press Service: "South Africa’s automotive manufacturing sector is the country’s flagship industrial support sector, with about two billion dollars having been pumped into it through a series of subsidy schemes. However, as the industry is capital intensive, some commentators are worried that the South African government has been assisting a sector that does not do enough for job creation."

allAfrica.com: "IMF estimates suggest that a $0.25 per litre increase in fuel prices equates to a 5.9% decline in household real incomes - hardly a popular move, whatever the long term economic merits might be." 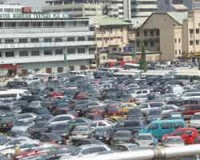 Ikeja: A Business District Without Parking Space: "With a population of 18 million, Lagos has about eight million registered cars on the road. When this is added to the thousands of heavy-duty trucks and trailers that come from all over the country to the city’s seaports and depots, it becomes obvious that the city is choked with vehicles, with little or no space to park."
at 8:01 AM No comments:

allAfrica.com: " transportation is one of Accra's key challenges with growing numbers of citizens and vehicles placing increasing pressure on the city's road networks. With 90 percent of all transport in Accra by road, traffic jams have a negative effect across many other areas such as business, emergency response, the environment, education and healthcare."
at 11:09 AM No comments:

Kenya : Bribe-taking police officers driving matatus out of the road

According to matatu operators, the officers no longer inspect vehicles as required by the law but demand bribes and allow unregistered transporters to operate freely."