Must the poor go hungry just so the rich can drive? | George Monbiot | Comment is free | The Guardian

Must the poor go hungry just so the rich can drive? | George Monbiot | Comment is free | The Guardian: "Biofuels are the means by which governments in the rich world avoid hard choices. Rather than raise fuel economy standards as far as technology allows, rather than promoting a shift from driving to public transport, walking and cycling, rather than insisting on better town planning to reduce the need to travel, they have chosen to exchange our wild overconsumption of petroleum for the wild overconsumption of fuel made from crops. No one has to drive less or make a better car: everything remains the same except the source of fuel. The result is a competition between the world's richest and poorest consumers, a contest between overconsumption and survival." 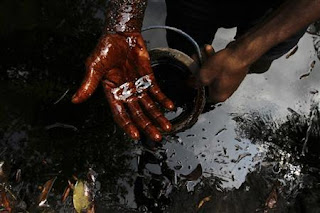 A man samples crude oil at the bank of a polluted river in Bidere community in Ogoniland in Nigeria's delta region August 20, 2011. Picture taken August 20, 2011.
Credit: Reuters/Akintunde AkinleyeInsight: A year on, Nigeria's oil still poisons Ogoniland | Reuters: "(Reuters) - A bright yellow sign above the well in this sleepy Nigerian village says 'caution: not fit for use', and the sulphurous stink off the water that children still pump into buckets sharply reinforces that warning."