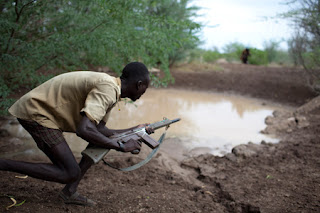 © EVAN ABRAMSON
A young man from the Nyangtatom tribe patrols a water access point on the border between Ethiopia and Kenya.
An Under-Reported War Over Water: "Almost unnoticed by the mainstream media, the political consequences of global climate change are now playing out in East Africa. Tribes that have co-existed peacefully for centuries along the border between Kenya and Ethiopia are going to war over diminishing water resources as their livestock dies, their crops fail, and they starve."
at 12:31 AM No comments:

South Africa floods kill more than 100 - AlertNet
JOHANNESBURG, Jan 24 (Reuters) - Flooding in South Africa has killed more than 100 people, saturated farms in the major food producer for the continent and led the government to declare 33 municipalities disaster areas.
at 1:54 PM No comments:

Nigeria | Flickr - Photo Sharing!: "Once serving as part of the floor for a much larger Lake Chad, the area now known as the Bodele Depression, located at the southern edge of the Sahara Desert in north central Africa, is slowly being transformed into a desert landscape. In the mid-1960s, Lake Chad was about the size of Lake Erie. But persistent drought conditions coupled with increased demand for freshwater for irrigation have reduced Lake Chad to about 5 percent of its former size. As the waters receded, the silts and sediments resting on the lakebed were left to dry in the scorching African sun. The small grains of the silty sand are easily swept up by the strong wind gusts that occasionally blow over the region. Once heaved aloft, the Bodele dust can be carried for hundreds or even thousands of kilometers." Photo - NASA
at 4:49 AM No comments: 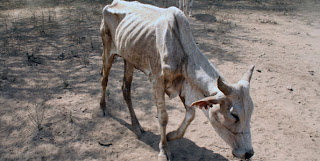 An emaciated cow forages for pasture in Daaba in Isiolo on January 12, 2011. Herders are losing their cattle as drought continues to bite in most parts of the country. The government has now moved to tackle the famine crisis in the country. Photo/JENNIFER MUIRURI
By GATONYE GATHURA gathura@kenationmedia.comPosted Thursday, January 13 2011 at 22:00
Daily Nation: - News |Sh236bn needed to tackle Kenya drought crisis: "The first comprehensive Action Plan ever prepared by the government on climate change says the evidence of a warming Kenya is unmistakable and will have serious effects on all sectors of the economy."
at 9:25 PM No comments:

Burning up biodiversity: forest fires increase in Madagascar: "The number of fires burning in and around forests in the northeastern part of Madagascar increased during the 2010 burning season relative the the year before, according to analysis of NASA data by WildMadagascar.org / Mongabay.com. The rise in burning corresponds to an especially dry year and continued illegal logging of the region's biologically-rich rainforests."
at 7:13 AM No comments: