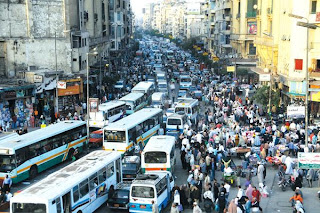 Al Ahram
Looking-for-a-technological-fix - Al-Ahram Weekly: "One recent study by the World Bank estimated that Cairo’s congestion problems were costing the country LE50 billion a year, or four per cent of Egypt’s Gross Domestic Product (GDP). The figure includes losses to productivity due to people sitting in traffic instead of working, additional fuel consumed due to prolonged travel times, and the environmental impact of increased vehicle emissions.
...Unfortunately, the capital suffers from an unreliable public-transport system, and there is a lack of data about it such that it can be hard to know the arrival times of buses and their destinations. “There are roughly three billion hours wasted a year as a result of waiting for buses,” Noureddin said."