Nigeria: the wages of oil -- death 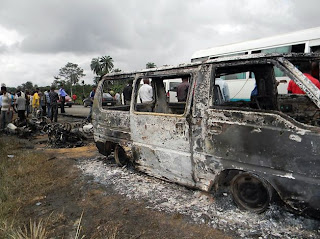 AFP PHOTO/STRSTR/AFP/GettyImages Photo: Str, AFP/Getty Images / SF
At least 95 killed in Nigeria tanker truck fire - SFGate: People gather next to a burnt minibus after a Nigerian petrol tanker tipped over and pools of spilled oil caught fire in Okogbe on July 12, 2012. More than 100 people who rushed to scoop up fuel after a Nigerian petrol tanker tipped over on July 12 were killed. Children were among those killed, while dozens more were badly burned, despite a warning from troops who arrived at the crash site that a blaze could ignite at any moment. The tanker driving in the southern Rivers state swerved as it was trying to avoid a collision with three oncoming vehicles including a bus, said Kayode Olagunju, head of the state's Federal Road Safety Commission.